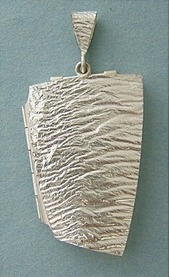 Up for a good challenge?
Ready to hone and broaden your design and fabrication skills?

Participants in this workshop will focus on the design and fabrication of lockets. All lockets are pendants, but not all pendants are lockets! Lockets are hinged pendants which, when opened, often resemble a butterfly. Hence, the halves are often referred to as "wings."


Popularized in the mid-19th century during the Civil War era, lockets were originally designed to hold personal, nostalgic mementos like a strand of hair or a photograph

Topics covered will include: locket design (including what you want it to contain), construction; soldering and assembly techniques, hinge construction and simple closures. John will also cover the preparation and torch-texturing of reticulated silver sheet which may, if desired, be incorporated into the locket.