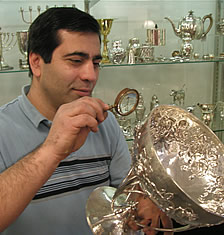 Master Silversmith Gia Gogishvili will guide the participants through the old world technique known as Filigree. The word filigree is derived from the Latin words ‘filum’ meaning tread and the ‘granum’ meaning grains. Eastern European Filigree is constructed from tiny twisted silver or gold wires soldered to a wire frame. Tiny balls formed of silver or gold wire and cabochons or gemstones in bezels are added to further add ornamentation to the piece. This beautiful technique has an opened back and has the look of delicate lace.

The instructor will provide the design to make a lovely bracelet. The materials to make a powdered solder will be supplied by the instructor. There will be a fee of $20-30 (due to fluctuations in the metals market) payable in either cash or check to the instructor on the first day of class.

Prerequisite: Students wishing to participate in this workshop should possess intermediate to advanced jewelry construction skills and be proficient in soldering.
Gia Gogishvili's Bio

Working in the metal arts influenced Gia Gogishvili early in his life, as he came from the country of Georgia, a region that is known for metal works. His father, Jamal is a jeweler and silversmith and his grandfather was a metal smith.  His formal art education began at the age of 14 in Georgia and later at the Moscow Art University.  As an advanced student Gogishvili interned at the Hermitage in St. Petersburg, Russia restoring priceless treasures from the 15th through the 18th century.  He achieved the title of Master and specializes in restoration, metal sculpture, inlay, chasing, repousse, niello and filigree.  His personal work is influenced by the traditional Eastern European techniques, naturalism and modernism.  In Georgia and Russia, Gogishvili participated in exhibitions of his personal work.  He was awarded second place at the Art Association of Nations Exhibition in Moscow.  This is a major accomplishment considering the entries came from all 15 republics of the Soviet Union.

He came to America as part of a two week exchange of artists at the age of 26.  Richard Mafong, an art professor at Georgia State University and Jon Eric Riis, a textile artist hosted his stay, and convinced Gogishvili to remain in America to teach the eastern European metalsmithing techniques.  Later, Estes-Simmons Silver Plating sought out and hired Gogishvili as a restorer.  He is now the owner and principle silversmith for Estes-Simmons Silversmiths.  Gogishvili has worked on several major projects during his time at Estes-Simmons.  First he constructed a trophy for the FIFA World Cup Junior Soccer Championship sponsored by Coca-Cola.  Also, he restored an original Bobby Jones trophy, which was nearly destroyed, to its original form.  Because of his reputation as a skilled metal restorer, several museums have requested him to restore their precious works of art. He continues to teach the old world techniques and dreams of owning his own studio to continue sharing his love of old world metal arts with new generations.  Gogishvili lives in Roswell, with his wife, Tina and daughters Sophie and Mariam.